When I was growing up, my mom taught me a few things about cooking.

She knew how to make food taste good, and she started teaching me how to use basic recipes at a young age. I remember the thrill of independence I got from being alone in the kitchen, not needing her help to prepare food.

I also remember the taste of mixing up one tablespoon of of salt in the rice with one teaspoon.

And I remember how, during every single meal I cooked, my mom would say, “Food tastes so much better when someone else makes it!”

Now, many years later, I find myself saying the same thing – how true it is!

So pardon me for sounding like every other housewife in the country when I say how much I love going out to eat. I like cooking, too, but how sweet it is to have a break from all the time and effort involved in feeding my family, and cleaning up afterwards.

We don’t eat out very often, which probably adds to the treat of it when we do. It’s partly a budget thing, and partly a pain in the diet thing. Because of some issues with food intolerance, including gluten, it can be tricky to find food I can eat in a restaurant.

In spite of this challenge, we’ve been able to find a number of restaurants we enjoy which serve food equally pleasing in taste and ease of digestion!

Bellisimo’s – Ben’s parents took us here for my birthday last year, and it was quite unforgettable. They offer gluten-free pasta, and cooked up a special dish just for me, to accommodate my digestion issues, and it was one of the most delicious meals I’ve eaten all year. I fantasize about going back. It’s a bit of a pricier place, but very nice, and the other items on the menu looked amazing.

Sushi N – Our family discovered sushi this year. Anika was doing a little homeschool project on Japan, and we wanted to try some Japanese food. When Ben suggested sushi, I was not overly excited, as the thought of raw fish has always grossed me out.

When Ben informed me that sushi does not have to contain raw fish, I became a little more interested in sampling some sushi, so the next time our family went shopping at Superstore, we grabbed a tray of fresh sushi.

It was not love at first bite. The flavor took a little while to grow on me, but after a few rolls, I decided sushi was definitely something I’d like to eat again, preferably somewhere classier than Superstore.

We bought sushi a few more times throughout the year, but it wasn’t until my birthday this year when Ben and I actually tried an actual sushi restaurant.

A friend of mine who had lived in Japan for a few years recommended Sushi N as one of the best locations to get sushi in Winnipeg, so off we went!

My word, that menu was intimidating! So many choices! And strange names. Ben had to google sushi lingo, and we hesitantly placed our order.

Turns out, I love the California or Vegetable Rolls. Oh, yum. 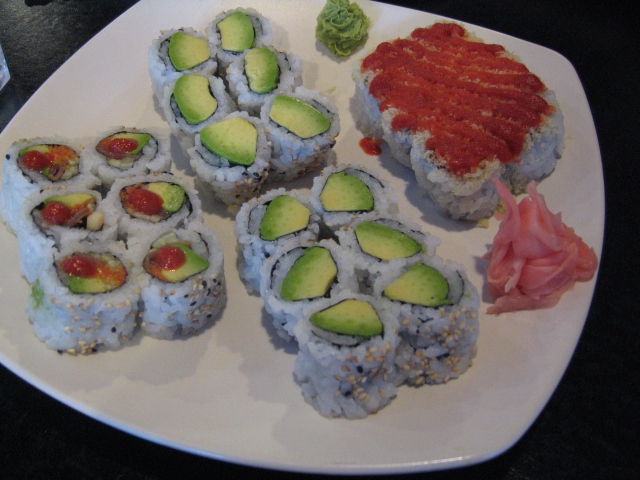 My words of advice: do your research before you go, or go with someone who knows their sushi! And then go back again and again!

The Works – This final favorite is a bit of a cheat, because I only experienced it this last weekend, and not during the 33rd year of my life. It’s so good, though, I have to share…

While visiting my sister in Ottawa, we went out to eat at The Works. They serve every kind of burger you could possibly imagine, plus a whole bunch you couldn’t. (Peanut butter and bananas on a burger??)

I haven’t had a burger in five years, and oh, sweet goodness. There are no words. Gluten-free turkey burger with a topping of tomatoes, garlic, and oregano.

You may have to travel if you want to try this one, though, because it’s only an Ontario thing, sadly.

There you have it – my three new favorites. What are your favorite restaurants?

It's podcast episode day!! 🙂 I love podcasts, and I love chatting with Ben, so today we're combining these two delightful things.
To celebrate Mother's Day, we take a nap, go to the greenhouse, and eat steak. The perfect kind of day.❤️
Someone asked me the other day if I get comments about my grey hair in public. And the answer is yes - much more comments about my hair now than when it was only brown. But what makes me sad is that most of the women who comment on my hair say something like, "I wish I was brave enough to grow out my grey hair, too." And I wish we didn't live in a world where it takes bravery just to have your own hair colour.
Anika moved home from college this weekend, and we have one beautiful week with her before she leaves for four months of camp.
I told Everett he could skip homeschooling this morning if he helped me cook soup, which he thought was a very good deal. But since he practiced measurements, learned how to use our food processor, practiced peeling vegetables, and learned the proper way to hold a knife and cut an onion without tears, I think I got the better deal. 😉 He asked, "Is this a million times better than doing it without me?" Absolutely.❤️
Everett has a habit of whispering to himself, whether he's playing on his own, or just talking things over to himself, which I love. I happened to overhear a serious conversation the other day when he came in from playing with friends to wash his hands. I was putting a load of laundry into the dryer outside the bathroom door, and heard him whisper to his reflection in the mirror, "First of all, that was completely unnecessary. And secondly..." I didn't catch the rest of that thought. But as he ran back outside, I was left to wonder: What would happen if more of us would have pep talks in the bathroom mirror to remind ourselves that a lot of things are, in fact, completely unnecessary?