Anika has always been this blog’s biggest fan. She could spend hours and hours going back over all the pictures, and reading the funny things Kaylia used to say when she was learning how to talk. She skips the “boring” posts (anything written while I’m feeling deep and spiritual), and usually sticks to the pictures. But the other day, she told me it had been too long since I’d written a post about what we’re loving around here right now.

This fall has been good to us – we’ve discovered a whole list of new things to love, so I’m delighted to share them with you today!

Cheap, fast, easy, and very intensely chocolatey. There, that should be enough to get you pulling out your food processor already. The recipe can be found here, and you’ll have your loved ones happily eating beans. Yes, this is related to black bean brownies, so I understand that it’s a love/hate kind of thing. Fortunately, my family loves it, and the girls are picky when it comes to beans, so this surprises me. There’s also a recipe for Chocolate Chip Cookie Dough Hummus on the same site, but we haven’t had time to try it yet, because everyone is so obsessed with the chocolate. 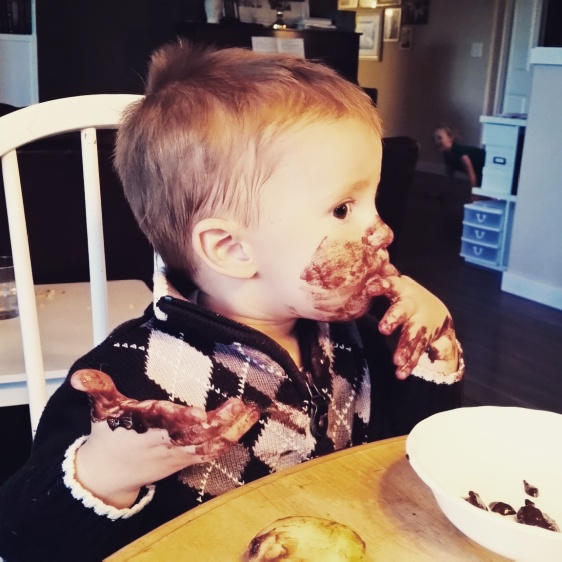 I rarely watch movies anymore, because we prefer to watch a quick show instead, but Ben and I did watch “The Martian” a couple of months ago, and I’ve been wanting to see it again ever since! I loved it, and I didn’t think I would. Usually, I don’t like space movies, but Ben was very sure I would like this one, it’s on Netflix, and the trailer looked promising, so I decided to give it a shot.

It was so good!! Matt Damon stars in it, and it’s a story about an astronaut who is left behind on a mission to Mars. He has to find some way to survive until the next space ship lands on Mars – in four years. Here’s the trailer:

A few years ago, a friend told me to go buy myself a small vacuum to use instead of a broom. It sounded like a good idea, but I just never got around to it, because it didn’t feel like a pressing need.

Oh, my word. If you have hardwood floors, this actually IS a pressing need! We bought it a couple of months ago, and have used it often. It is much faster than sweeping, and I love not having any cord to worry about. It’s so much fun to use, the girls like to vacuum now, and chase Everett around the house with it while he squeals with delight-verging-on-terror. He also loves to be the one controlling the vacuum, and I’m happy he has something to entertain him! If he actually happens to pick up any garbage, even better! Win/win.

This is an app to use if you want to read through the Bible in a year, and you’d like a better understanding of the background of each book of the Bible. There’s a really cool video at the beginning of a new chapter that breaks down the theme and background of the book. The artwork is fantastic, and it helps explain things very well. I started using this a few weeks ago, and I’m really enjoying it. Plus, I’m a check mark girl, so I like being able to mark it off when I’ve finished my reading. The drawback is that I tend to get into a “finish the reading for the day!” mindset, rather than a “meditate on Scripture” focus, so I’m trying to take time for both.

Last spring, one of my trusted alternative health people told me about this new gut health product called “Restore”, and it only took a couple of weeks of trying it to start noticing it’s benefits. We felt like it gave us a lot of energy, Ben said he didn’t get his mid-afternoon sleepiness, and the girls were able to eat gluten again for the first time six years.

But during the summer, I made a mistake with ordering options, and we ran out of Restore. After a few weeks without it, I felt exhausted, I had issues sleeping, we felt like our digestion was sluggish, the girls went back to getting sick from eating gluten, and we just felt all-around a bit yucky.

We were pretty excited when a new bottle arrived! It took a few weeks to get back to our “new normal”, but we seem to be back on track now!

Besides the fact that it makes us feel great, here are the other things I love about it:

Here’s a quick video if you want to hear more about it, and it can be ordered here, if you feel like giving it a try! No strings attached.;)

And finally, my recent favorite book:

Secrets of the Secret Place

This book is changing my devotions. It’s inspiring, practical, and really beautiful – like this gentle invitation to get away with Jesus on a daily basis. I love practical suggestions for how to bring about change, and this book is full of them. I’m about halfway through, so I’m sure I’ll have more to say once I’ve finished it! I’ve copied out many quotes, but here’s one of my recent favorites:

“The longer you’re in God’s presence, soaking in His word and basking in His love, the more power you’re ingesting into the very fiber of your being. The only way we change is when we come close to the Lord. His presence is the place of change.”

Well, that’s a super random list of favorites! Let me know if you happen to give anything a try! Share the love.