I can clearly remember the day I was introduced to the idea that spiritual warfare existed.

I was an innocent girl at camp, sitting at a picnic table with my friends, and my camp counselor took it upon herself to educate me.

I sat there frozen to the wooden bench, my eyes probably the size of saucers, listening in horror as she told the story of a young boy who had felt a presence in the room, and turned around to see yellow eyes glowing in the dark. Somewhere in there, either he was thrown at the wall, or an object from his room were thrown at the wall, I don’t remember.

Maybe I was on overload at that point, and things start to get a bit fuzzy….

Anyway. I heard the odd story through the years after that, but I didn’t really face the idea of spiritual warfare until I was in college.

At that time, my mom gave me a copy of The Bondage Breaker, because she felt it would be helpful to use during my summers at camp. I never did come across anything crazy at camp, and I didn’t spend much time reading the book at that point. 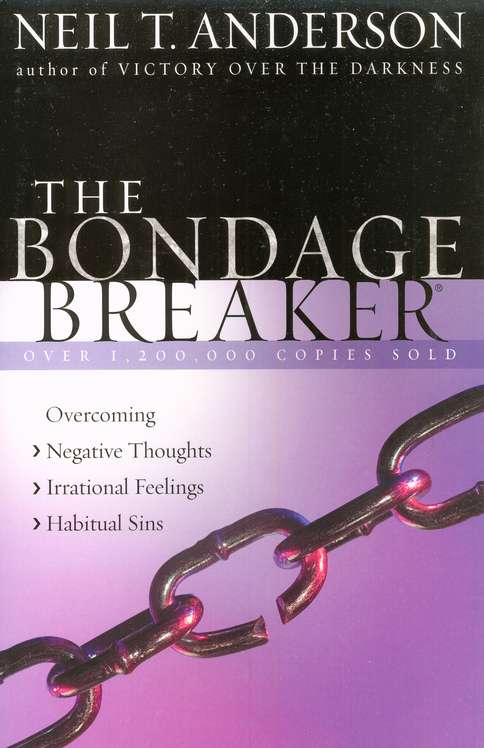 One of my friends borrowed it from me, however, and had a really life-changing experience as a result.

After that, another chunk of time past without the topic coming up.

Until the fall Ben and I got married, and moved into our first home, a cozy little apartment.

We had only been married for about two months when really strange things started happening to me. It started very subtly at first – weird thoughts would suddenly zip through my mind out of nowhere. Not “normal” thoughts – thoughts unlike anything I usually thought about. Or sometimes just the same thought, over and over and over again, until I felt like I would go crazy.

I didn’t understand what was happening to me, and decided to try and wait it out.

But rather than going away, the problem got worse. The thoughts going through my mind got increasingly dirty and sinful, thoughts I had no desire to be thinking, but couldn’t seem to stop. I also started having nightmares – worse than anything I’d had before, about extremely dark, violent things. Sometimes when Ben and I were talking in bed before turning out the light, I would have a very real sense that a presence was behind me, and I’d be terrified to get out of bed.

Because the thoughts I was having were so dirty and awful, I felt very ashamed. I didn’t know what was wrong with me, but something inside told me that no one must find out what was happening to me, because I  had become evil and dirty.

So I kept it all a secret from Ben for as long as I could. But one night, I couldn’t take it anymore, and broke down in front of him.

I was petrified that it would destroy our marriage. I spilled it all out, and then waited in silence for what seemed like forever, terrified to hear what Ben’s reaction would be.

And after that silence, which probably wasn’t all that long, Ben reached out to me, and said, “Kendra, that’s not you.”

He suggested we go see our pastor, because although Ben didn’t know a lot about it, he felt quite sure we were dealing with some kind of spiritual warfare.

I made an appointment, but in the meantime, I remembered my copy of The Bondage Breaker.

One night while Ben was at work, I settled down to do some reading. At the end of the book are many different prayers to use when dealing with spiritual warfare. It is recommended to say these prayers aloud, which I fully intended on doing.

However, every time I tried to say the prayer, I would begin crying uncontrollably. I couldn’t get any words out because I was crying so hard.

I must have tried five different times to say the prayer, only to have my body break out into these violent sobs. I didn’t feel sad, I had no desire to cry, it was just happening to me.

Finally, I managed to get the words out, and could calm myself down. It was an incredibly odd experience. I didn’t really know what I was doing.

Ben and I prayed those prayers together regularly, asking for cleansing for me and for our apartment, until we went to see our pastor.

It was so good to talk with him, because he explained to me how it was not sinful to have those thoughts enter my head, but it would be sinful to choose to dwell on them. Satan is often tempting us with wrong thoughts, and it is possible for him to introduce the thought into our head, and making us believe it’s our thought, and that we do  want to think about it. Our job is to resist.

We went home feeling better equipped to deal with the issue. I started memorizing all kinds of verses about thoughts, purity, the Armor of God, anything to help me fight against the thoughts that wanted to set up camp in my head.

Ben and I also prayed over every room in our little apartment, even the storage room, every day for a month. We prayed every night for protection from awful dreams.

That assumed the thoughts I had during the day were pleasing to Jesus in every way.

And most of the time, they were, but Ben and I were quite liberal in what we chose to watch on TV. Nothing too crazy, of course. Just the usual stuff.

But every time I prayed about the thoughts I’d had that day, my conscience bothered me. One night, I was in bed, reading my Bible and praying, while Ben was in the living room, watching an episode of Friends on TV.

I loved watching Friends. But when I wasn’t actually watching it, and the lines I overheard were interrupting my devotions, suddenly all the funny stuff wasn’t so funny. I realized how desensitized I was to all of the negative joking, references to sex, and many, many other comments we had come to accept as “normal”.

Well, we decided to clean things up a lot after that. People we talked to about it thought we were ridiculous, but we found that as we regained our sensitivity, our desire to watch stuff we would have in the past…got a lot weaker. I still had twinges of desire, but we kept each other accountable, and stayed strong. Now we don’t miss it at all.

It took a long time (a few months?) to really get control over the thoughts, dreams, feeling just a weight of depression/anxiety/fear that seemed to settle on me for no apparent reason. But eventually, it did get better.

Since then, I haven’t really had much trouble with dreams, but sometimes my thoughts or that old heavy weight type of feeling come back. Then we know we’ve slacked off too much with praying for protection, and haven’t noticed little thoughts or attitudes sneaking up.

So that’s my story. I’m not saying that it’s evil for everyone to watch Friends. Here’s what I am saying:

1. Find out what you’re dealing with. There are good books out there on the topic. Read them.

2. But don’t get into the habit of thinking that everything is spiritual warfare. I heard someone say once that it gives Satan way too much credit. I don’t want to focus on him all the time. I want to focus on Jesus. I would rather pray hard, keep my thoughts clean, be smart, and live a free and joyful life. I really don’t like it when people think every little thing is Satan out to get them. We live in an imperfect world. Junk happens. Pray hard, and carry on. Let’s not get overly dramatic.

3.Take a good hard look at what you give access to, mentally. I have heard sooooo many people say that movies or TV don’t affect them! At all!

But they should. If you’re desensitized, it’s not a good thing. Numb to seeing pain, violence, and sex, and hearing tons of filthy language? I wouldn’t think that would be a desirable thing. I’m not saying we should stick our heads in the sand, and be all legalistic about this. Just be smart. Make conscious choices. Don’t watch junk just because everybody else thinks it’s okay, or because you paid money for your movie ticket. Walking out sucks. It’s humiliating. But very freeing.

4.There is no need to be afraid. Take it seriously, yes. But through Jesus Christ, we have all the power we need. Telling lots of freaky stories to small children is not advisable. Teaching them about the power in Jesus’ name is much more beneficial.

5. Memorizing verses is a very, very, very good thing to do. It is your weapon. Use it.

And that is all for now. If you read all 1500 words I just typed, you deserve an award!

Any other thoughts out there? No scary stories needed, but other comments are welcome!

When I was a kid, my family used to rent a cabin at the lake for a week every summer. I haven't been back there in many years, but I can still clearly remember the excitement when we'd drive through the trees and get the first glimpse of the lake. I remember how the lifejackets smelled in the boathouse, the creepy fish mounted on the wall in the living room, the sound of rain on the roof, and the way pancakes tasted even better when eaten outside on a perfect morning. I remember the screams when we'd discover a bloodsucker on our toes, the way my sister and I snagged the backs of our swimsuits from learning how to waterski off the dock, our little bedroom right off the kitchen, Monopoly games that would go on forever, the elaborate sandcastles, and the way my dad would waterski right up onto the beach.
When I was in college, my dad sat down with me for a serious talk. He told me to get a paper and pen to take notes, and he titled our talk "Guidelines for Girls With Hyper Hormones".
I made it my summer goal to begin and end each day outside, and it is my favourite thing about this summer. I usually eat breakfast on our deck, and in the evening, Ben and I will sit out there watching the sunset, or we'll just take a few minutes to stand outside, listening to the birds and the rustling leaves. It doesn't have to be long, it just has to be outside.
On Friday, Everett got the idea that it would be fun to set a timer for 59h 59m 59s. After a beautiful, busy weekend at the cabin, that timer went off at 6am this morning. It startled Everett and Kaylia so much that neither one could fall asleep again, so they decided to get up and pack all their stuff. When Ben and I got up a couple of hours later, their bags were ready and waiting at the cabin door.
Last night was perfect - the kind of evening when you don't ever want to go inside. And then just as I was about to climb into bed, I saw a full moon rising. So we headed back out, even though Ben was almost ready to fall asleep, because how often do we get to see a moon rising over the lake like that? The answer is not often enough.✨
Ben and I were discussing the size of his forehead, and trying to determine if his hairline has changed at all in recent years.